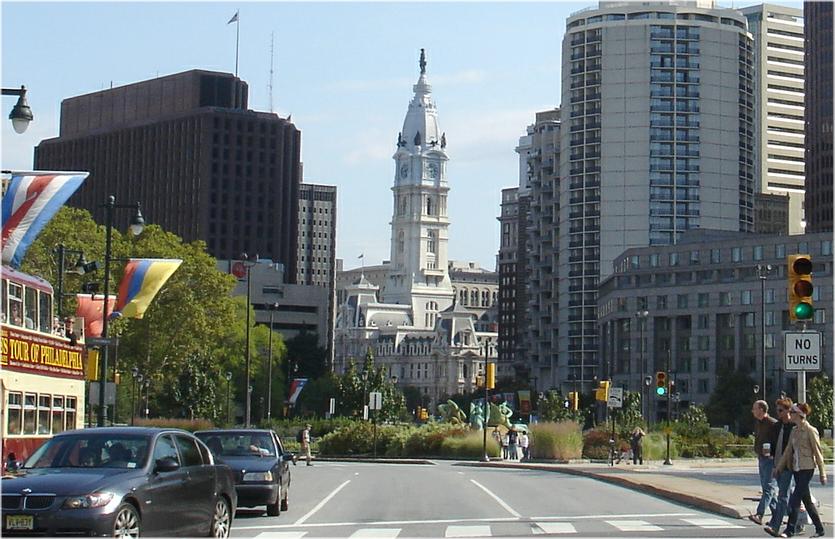 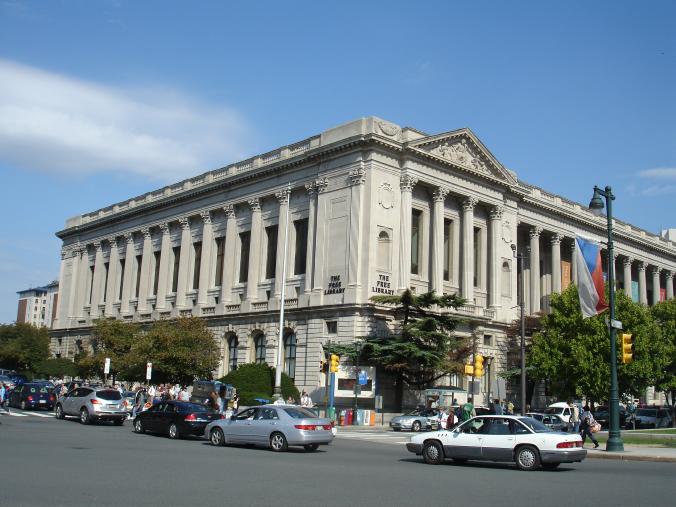 the stunning Free Library of Philadelphia (1926) at the entrance to the rally
I was posted at this corner and directed people into the appropriate lines depending on what kind of ticket they had
(gold for VIPs, red for volunteers, blue for everybody else)
The bicycle-riding Philly cops were impressed by my performance and told me to stand right by them to make their job easier.
They were extremely chill during the entire event--obviously overwhelmingly Obama supporters. 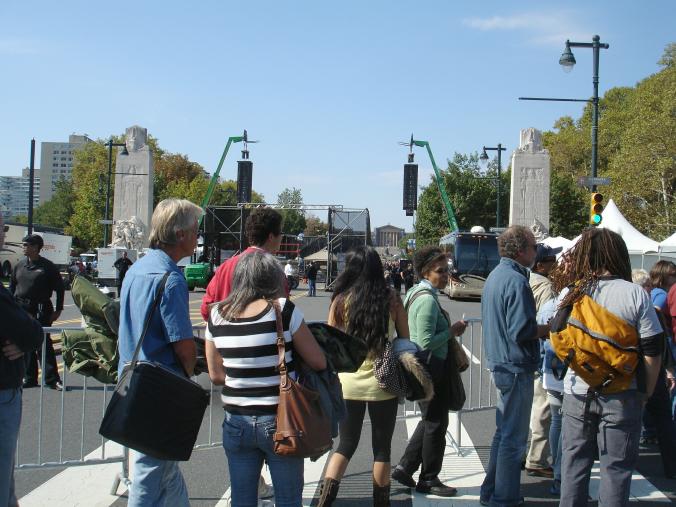 early in the day, as the crew was still building the stage and only the volunteers had arrived

some of the many amusing t-shirts seen at the rally...I didn't even snap my two favorites:
"This time I want a smart president" and "Eight is enough!" 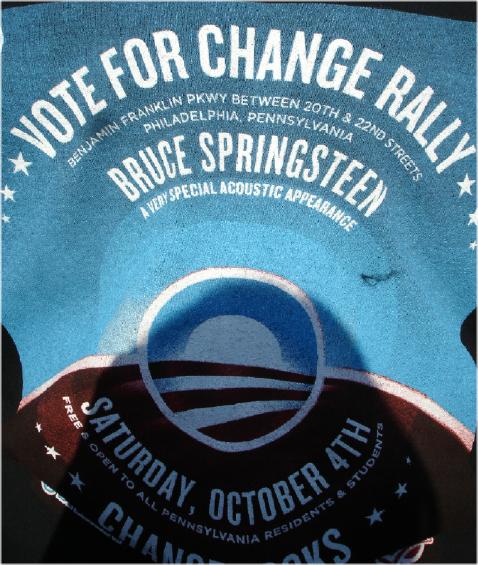 the event was planned so quickly that no "official" t-shirts were available,
but bootleggers sold plenty of these 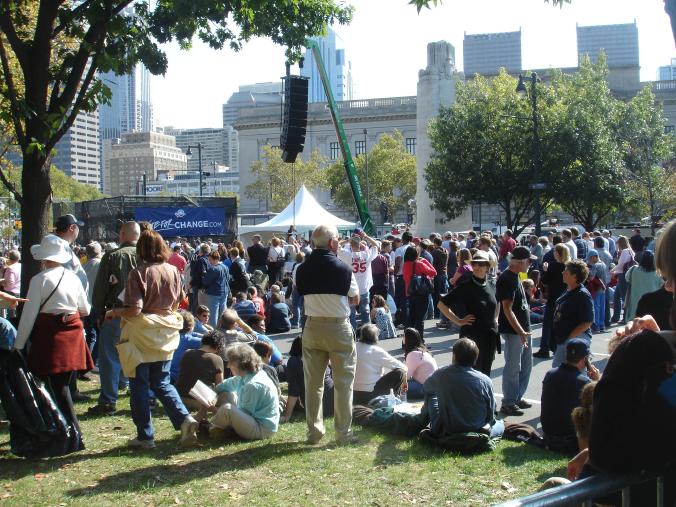 The VIP section starts to fill up (but it remained WAY more comfortable than the general admission section).
I would like to give a shout-out to volunteer Diane from West Chester,
who I hung out with for the first few hours of the day until we were separated by different assignments.
You're great Diane, thanks for the company.
Also thanks to Stanley from Camden for showing me how to ride the PATCO and SEPTA trains for the first time! 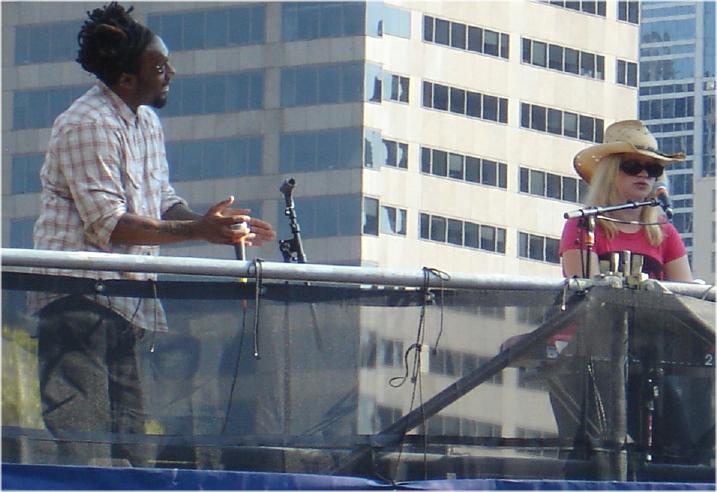 the first warm-up act was a group called The Hustle from Philly,
consisting of incredible singer Nora Whittaker and MC Kuf Knot 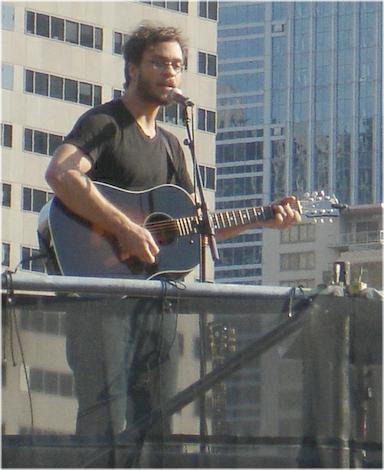 then came the excellent Amos Lee, also from Philly
(well, he's a graduate of Cherry Hill East--we New Jerseyans
are used to being associated with either NY or Philly, whichever is closer)
Amos ended his set with a well-received cover of the Sam Cooke classic A Change is Gonna Come (1964). 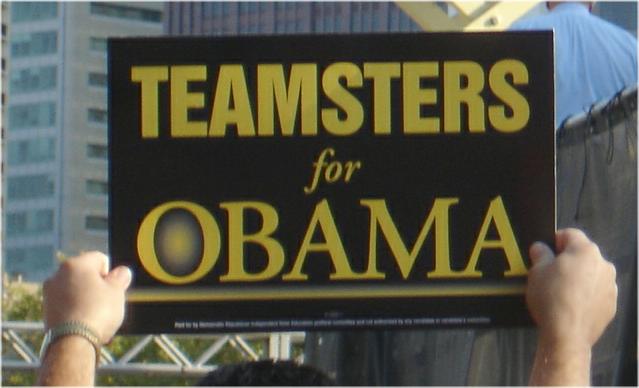 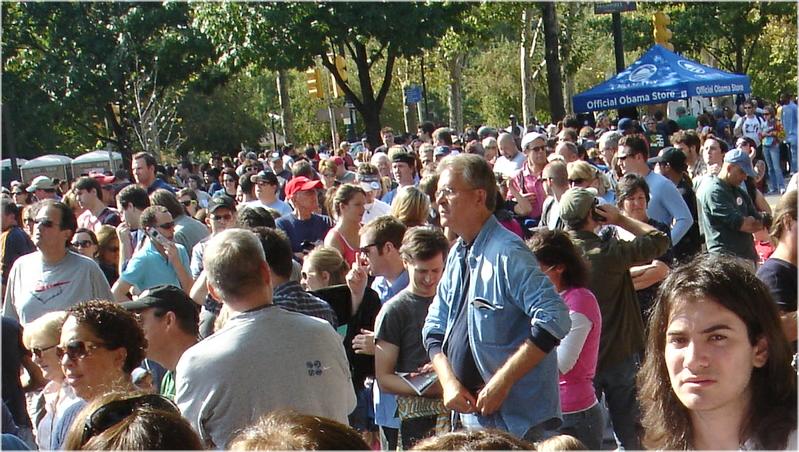 a tiny section of the gigantic crowd 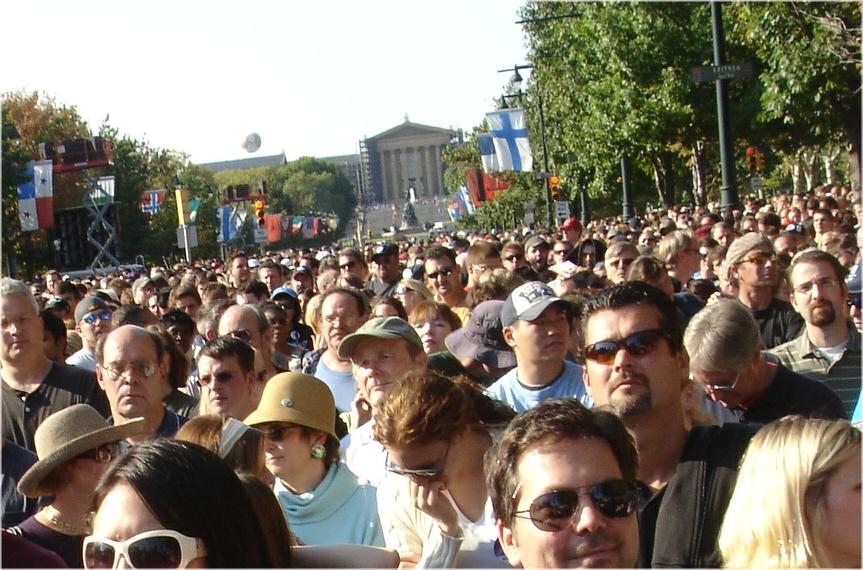 the crowd filled up the entire Parkway for five city blocks, all the way back to the Art Museum
(yes, those are the "Rocky" steps) 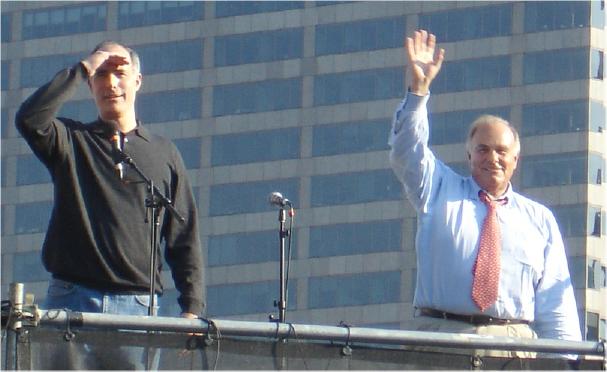 PA Senator Bob Casey, Jr. and former Governor Ed Rendell were charged with killing time till Bruce was ready to come on.
They said due to Obama's voter registration efforts, PA now has 1.1 million more registered Democrats than Republicans.
This is AMAZING in the reddest state in the Northeast (I think New Hampshire has already turned blue). 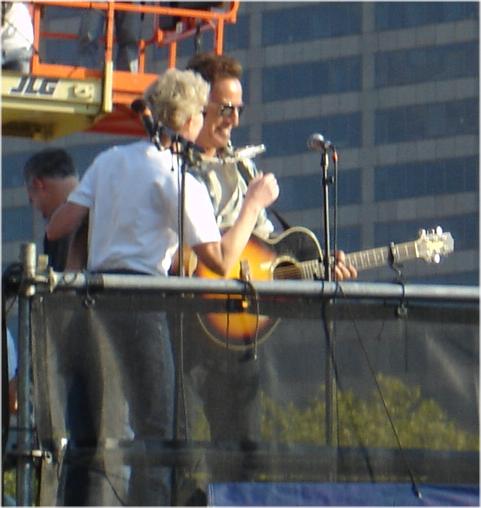 Bruce comes on, introduced by the woman who registered the most voters in the state.

The one and only Boss, with just his acoustic guitar and harmonica,
looking and sounding absolutely tremendous at age 59.
This was the fifth time I've seen him and by far the closest I've ever been to the stage.


Bruce addresses the crowd before playing The Rising
(my own upload to youtube!) 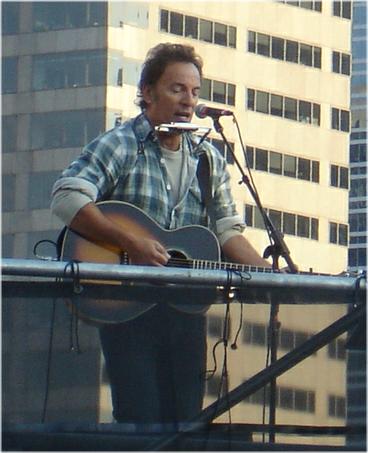 As the sun got lower Bruce took off his shades.
His carefully-selected setlist sounded almost like a prayer service:

The Promised Land
The Ghost of Tom Joad
Thunder Road
No Surrender
Does this Bus Stop at 82nd St? (with its line "the dope is that there's still hope")
The Rising
This Land is Your Land

group hugs during the singalong This Land is Your Land (Woody Guthrie, 1940) 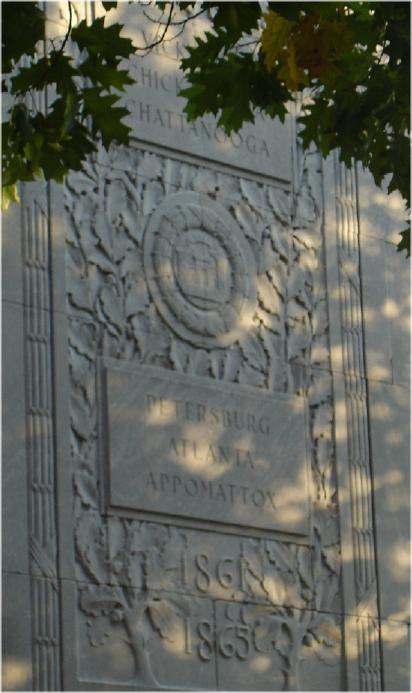 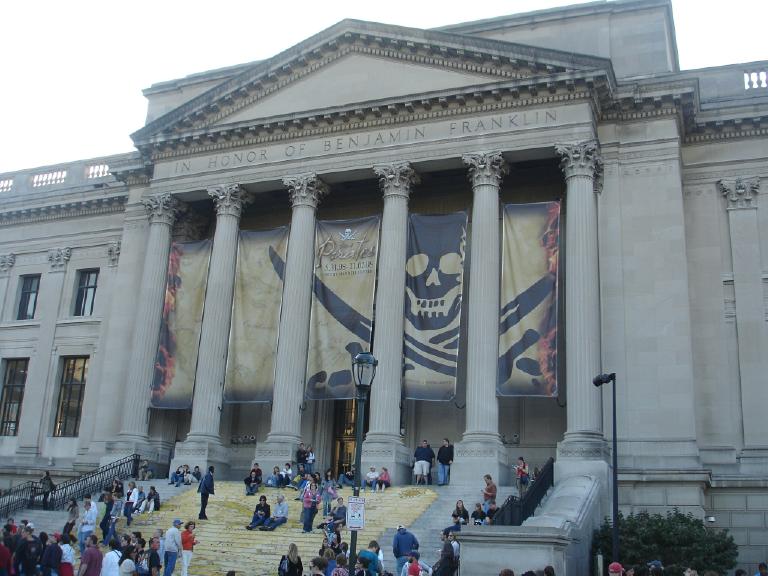 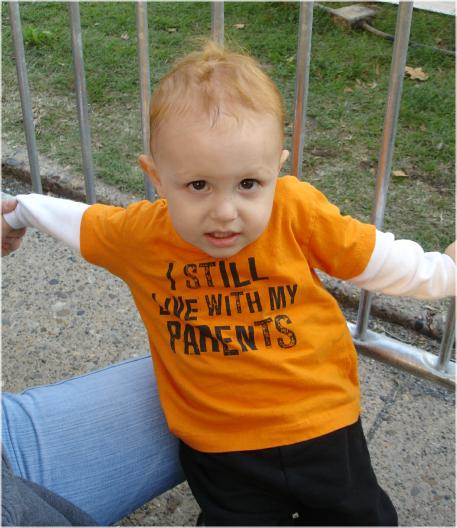 this little guy responded enthusiastically when you asked him who he wanted for president:
"Barack Obama!" 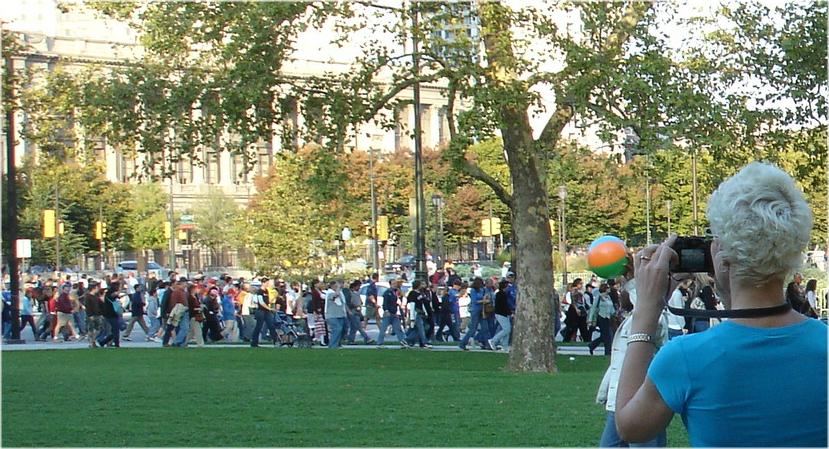 The crowd disperses after the event.
C'mon Pennsylvania, do the right thing and vote Obama!

To its credit the Philadelphia Inquirer ran a huge front page story on the rally,
along with additional commentary on Bruce's performance here.