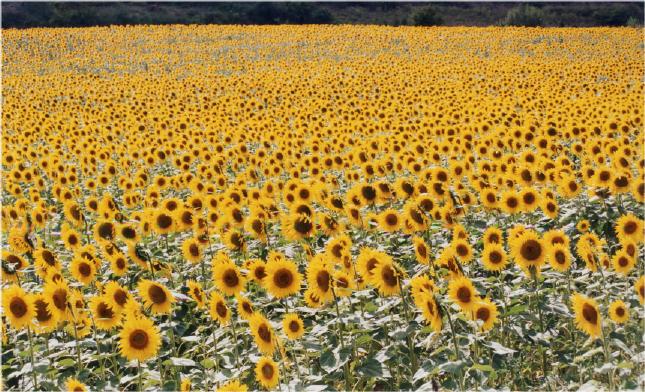 We will never be able to think of sunflowers again without
remembering these spectacular fields, all over the place in the Languedoc. 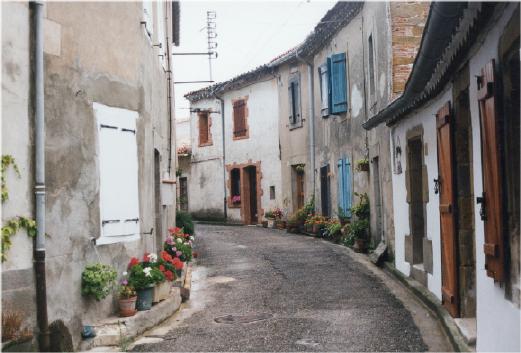 Rue Ancienne, the street where we stayed for a week in
tiny Escueillens, France
(halfway between Toulouse and Narbonne,
or between Limoux and Mirepoix if you know the area) 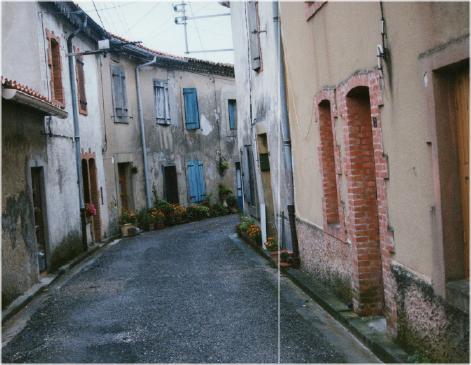 Looking the other way down the Rue Ancienne. The houses here are about 200 years old.
The village dates from the Roman era; it's about 2,000 years old. 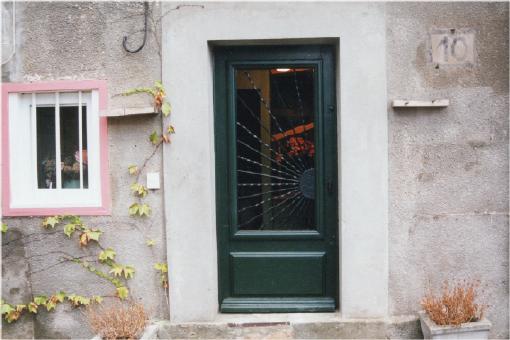 The front door of #10, where we were very comfortable.
The house is owned by an American woman and the rent is very affordable.
Our British-born agents manage many properties in the region.
Much cheaper than a hotel, highly recommended. 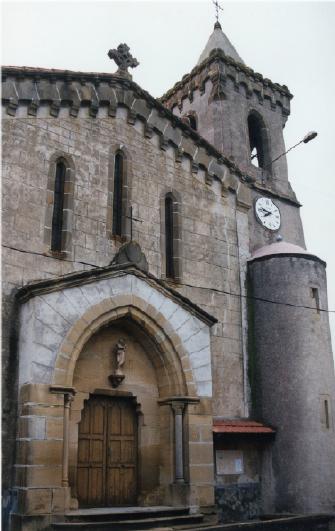 The village church. Its bell rang out every hour (twice, for some reason) and half-hour from 6 a.m. until midnight.
Apart from that bell, Escueillens was the quietest place we had ever been.
The village is too small (population maybe 100) to support a fulltime priest,
so the church is open only one Sunday a month.
It happened to be open the week we were there; there were only a handful of people inside. 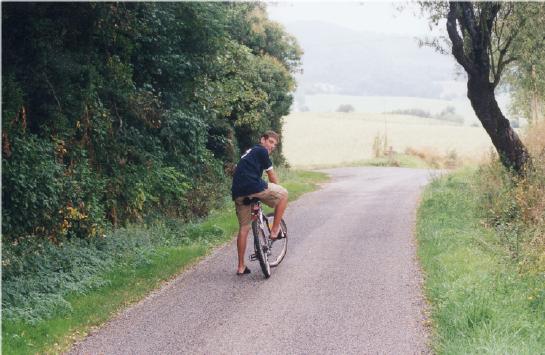 Tim just outside the village proper, on the house bike.
The kids found certain places where you could catch a cell phone signal
(and a beautiful view to go with it!) 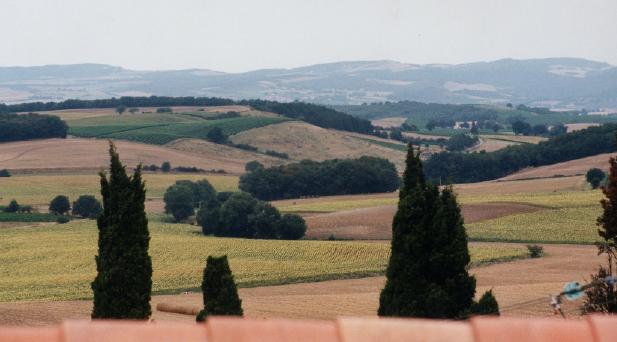 This was the view from our bedroom in Escueillens.
Rolling hills, sunflower fields, grape orchards and cypress trees.
Here's a recent article from the Guardian U.K. on the history of this region, which is west of Provence.
The Languedoc was the home of the Cathars (from the Greek katharos, meaning pure, the root of our word catharsis).
The Cathars were a heretical sect; they decried the materialism and warmongering of the medieval Catholic Church.
Of course they were brutally extinguished by Rome.More on the Cathars from the British Library here,
or read the book I read while in Cathar country, Chasing the Heretics.
.

Various shots of nearby Carcassone, the medieval city that lives again
as France's third-largest tourist trap (after Paris and Mont St. Michel). 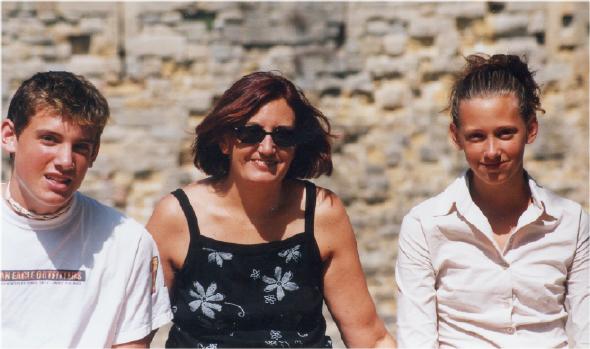 Deb and kids in Carcassone.
This was one of our few sunny days in the south, which was alas atypically chilly while we were there.
We ate some great (expensive) food in Carcassone including the famous regional dish, cassoulet. 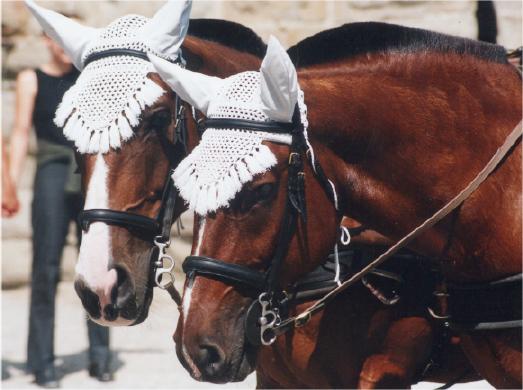 This is how they dress up the horses in Carcassone.
There are lots more pictures of Le Cité on Willem and Marga's site. 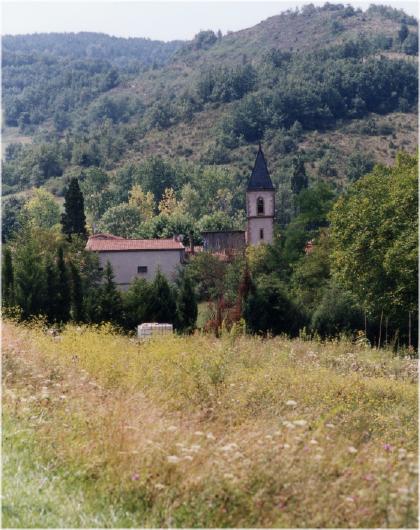 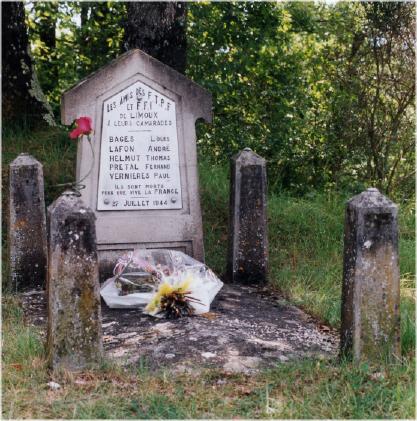 Memorial for five local men killed during World War II.
"They died so France may live." 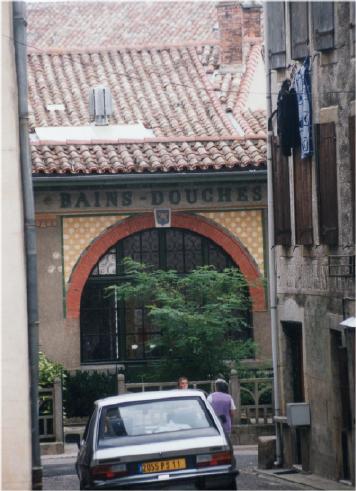 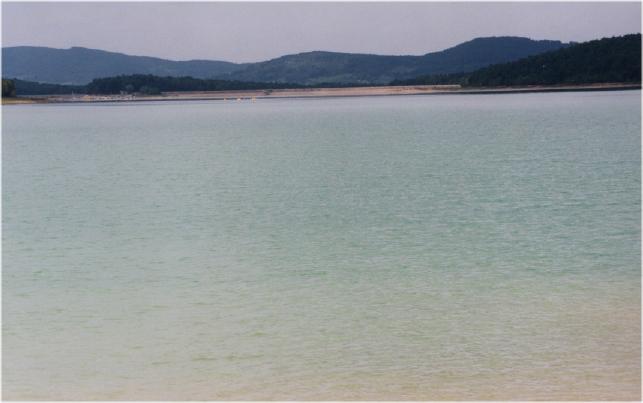 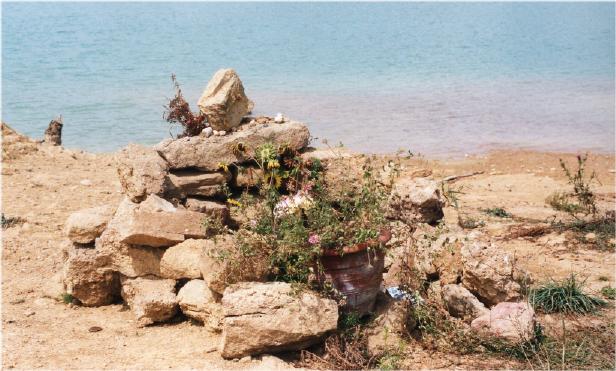 A boy Tim's age had apparently drowned in the lake just a few weeks before our visit.
This is a shrine built to him. His picture was inside the rocks, mounted in plastic, along with candles and flowers. 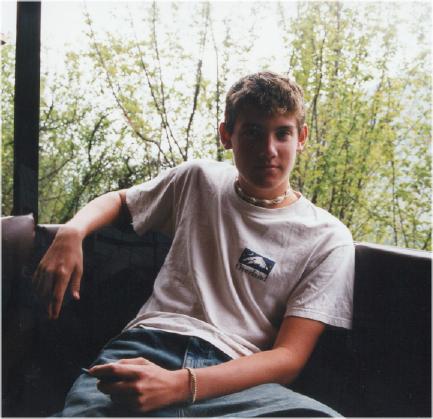 Tim on the little "train" that took us to the entrance to Europe's largest once-inhabited cave,
Lombrives, a half hour from Escueillens. It takes five days to walk the entire cave.
We just took the 90-minute tour but it was very cool. 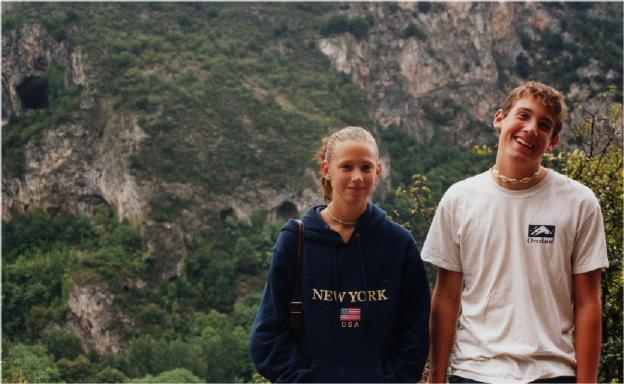 Liese and Tim with cave entrances in the background.
It was great to see the outside world again after we emerged, lemme tell you. 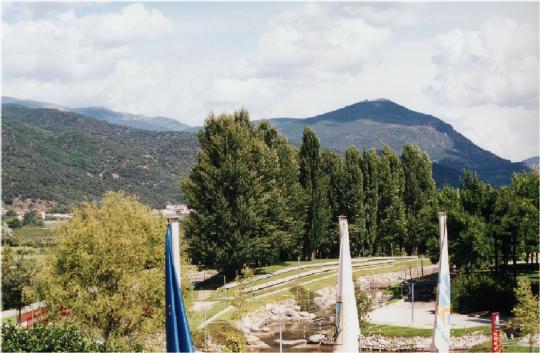 One day we drove over the beautiful Pyrenees Mountains through Andorra into Spain,
or more specifically Catalonia, the Spanish province of which Barcelona is capital.
This is part of the Olympic Park built for the 1992 Barcelona Olympics. It's where they held the kayaking competition. 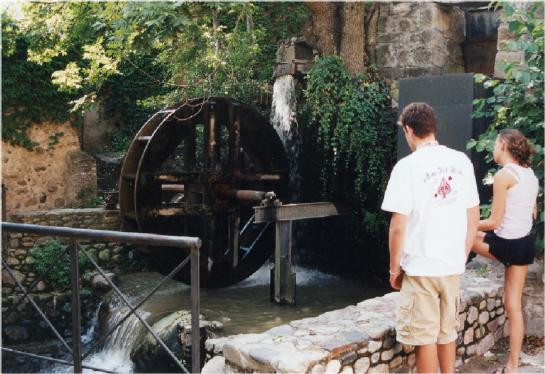 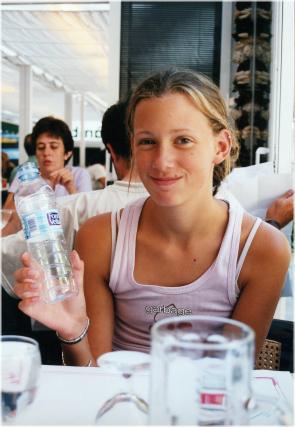 Liese enjoying another water without bubbles
(she can say that in many languages!) 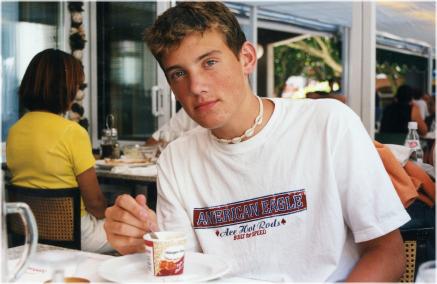 Tim eating Haagen-Dazs in Catalonia. The kids thought they could use their Spanish in Spain
but found out everything in Catalonia is in Catalan, which looks like Spanish and French all mixed up.
. 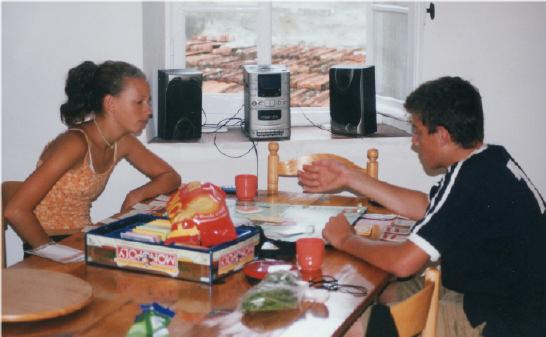 Back in the house in Escueillens, the kids played a lot of Monopoly. 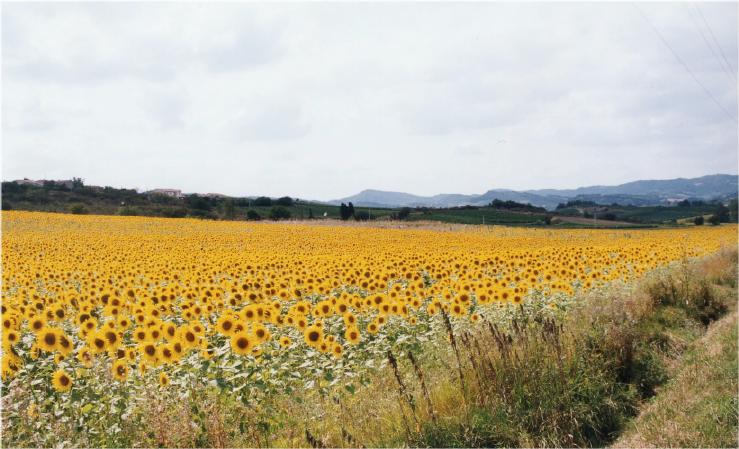 More of those spectacular sunflower fields.
The farmers will harvest the seeds for their oil; the flowers are just a beautiful by-product!
Total eye candy.
(Photo credit both sunflower photos: Liese)

On to Paris
On to Amsterdam