Bordentown City
Bordentown is an extremely charming little river town on the Delaware.
It's six miles south of Trenton, 24 miles south of Lambertville, and 19 miles from Dan's house.
It was established in 1682 by Quakers and has a long and glorious history.
Today it has a population of about 4,000.

Most of the homes in the city date from the Civil War era, 1850-1870.
There are some earlier specimens still standing, including a few from the 1700s.
Building was essentially halted 130 years ago when the railroads
killed the D & R Canal because they didn't want the competition.
So it's frozen in time architecturally, and it's just adorable. 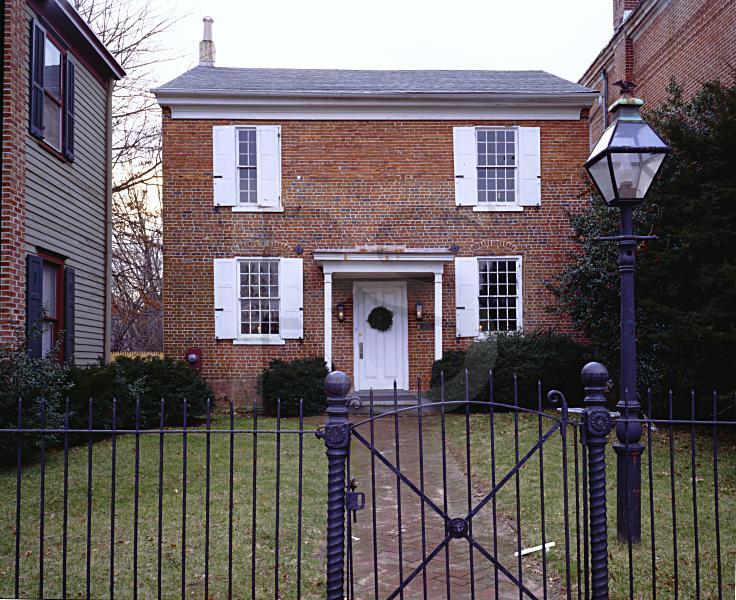 The original Bordentown Friends Meeting House
on the main street, Farnsworth Avenue.
This was Bordentown's first house of worship,
built in 1740 by the town's original Quaker
settlers on land deeded from Joseph Borden. 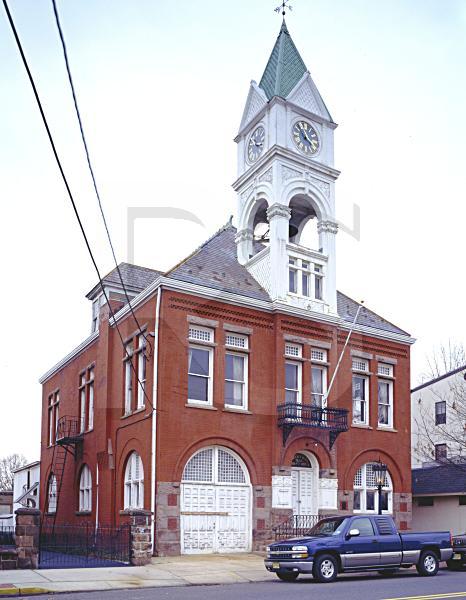 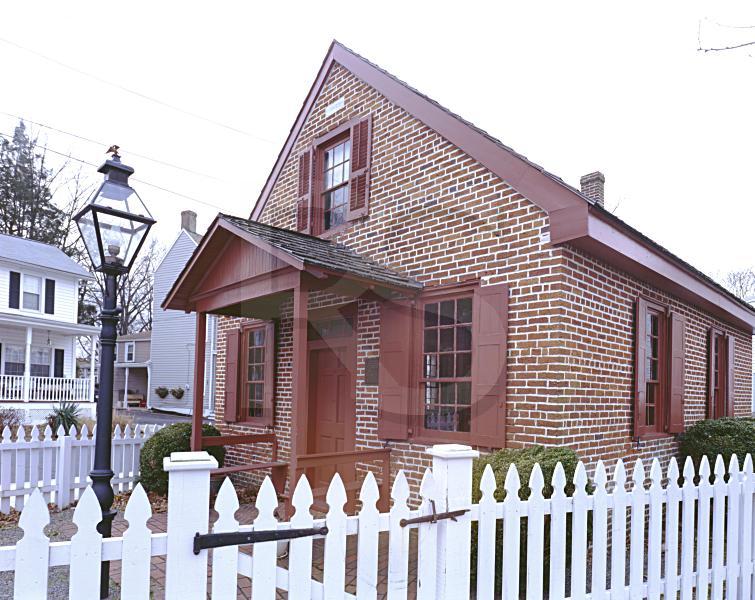 Clara Barton's original public schoolhouse, 1852.
This tiny building was the first free public school in the U.S.
Hired to teach at the school that, like all the schools of the day, required students'
parents to subscribe, Barton was disturbed by the many kids she saw hanging
around whose parents couldn't afford to pay. She offered to teach without
salary if tuition were waived for all. Attendance increased from six to six hundred.
She later resigned when the local officials chose a male principal over her. 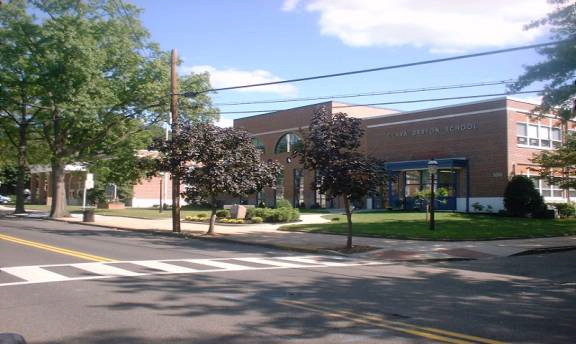 This is the Clara Barton (Elementary) School today, right down the street from the original building.
Built in 1954, it is one of the very few modern structures in town. 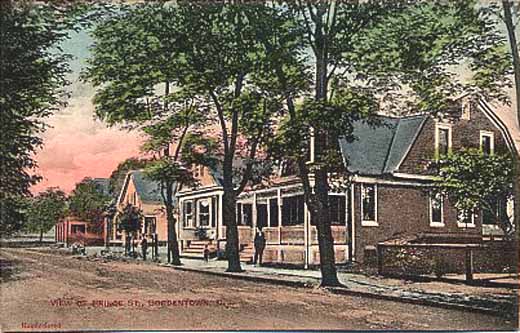 Here's what Prince Street looked like some time ago...

Built in 1850, this formidable building on the main street (Farnsworth) was the Bordentown Bank.
It'is now a used bookstore. At right, the building today. 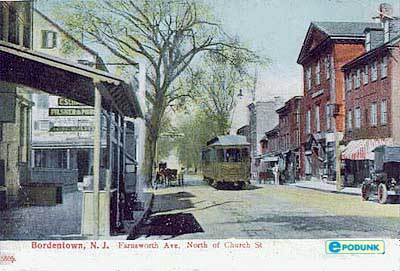 Farnsworth when the city had trolley cars, which was from 1913 to 1932 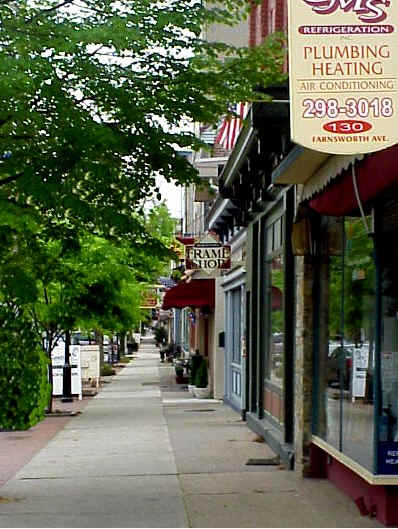 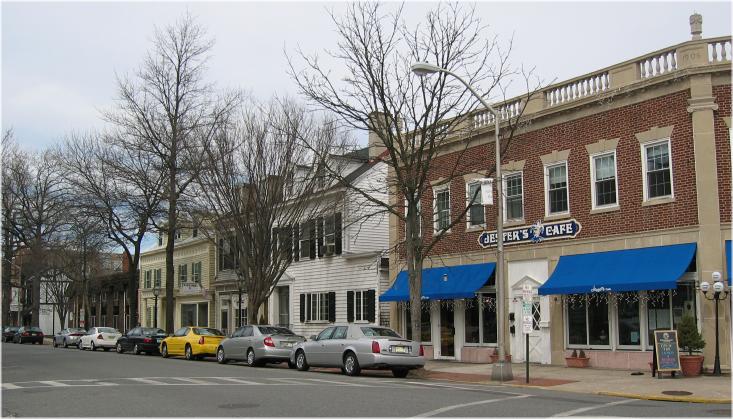 Another view of Farnsworth, the main commercial street.
Liese hopes to work as a waitress as Jester's, just two blocks from our house! 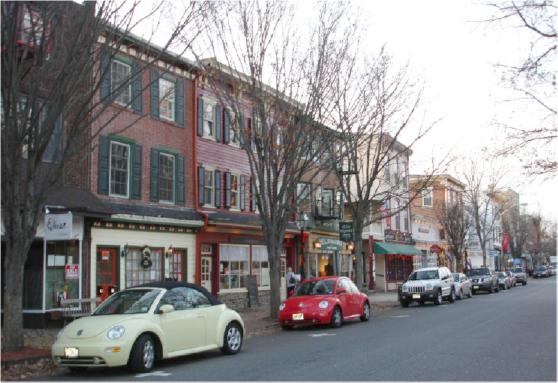 Farnsworth Avenue
(Mur, the double Beetles are for you!) 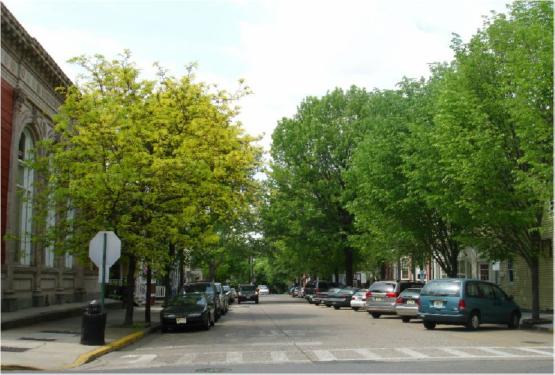 Here's Farnsworth in the bloom of springtime! 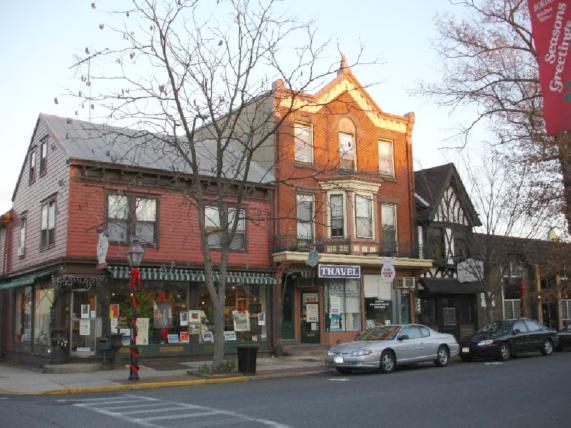 The Farnsworth House is the city's oldest restaurant...
that's Quaker Joseph Farnsworth himself on the side of the building...
he was the first European to build a house here in 1682. 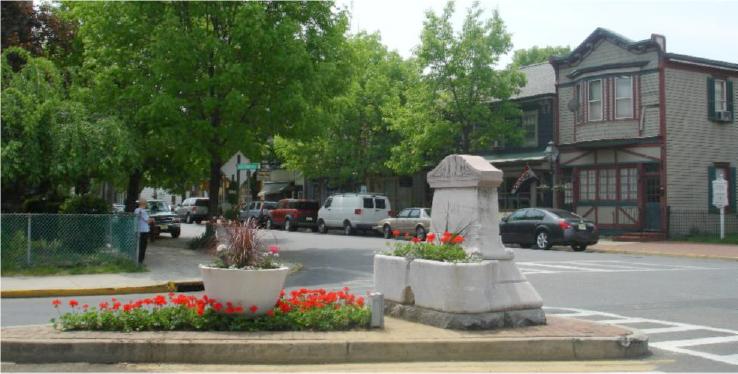 Crosswicks Street at Farnsworth.
WWI memorial in the middle of the street. 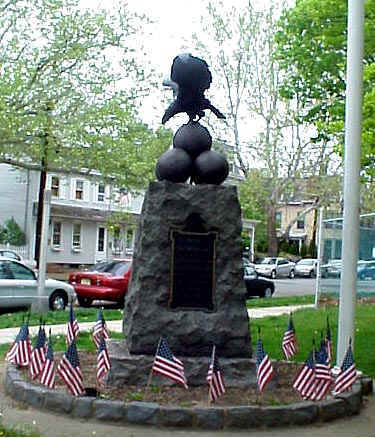 Bordentown's war dead in marble, from the Revolution through Iraq...
how unfortunate that they leave room for more... 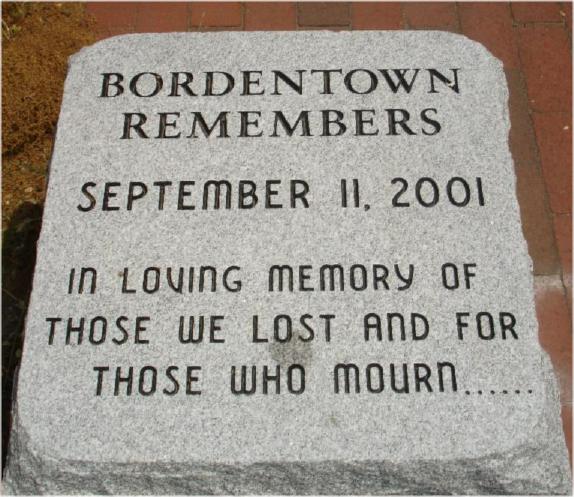 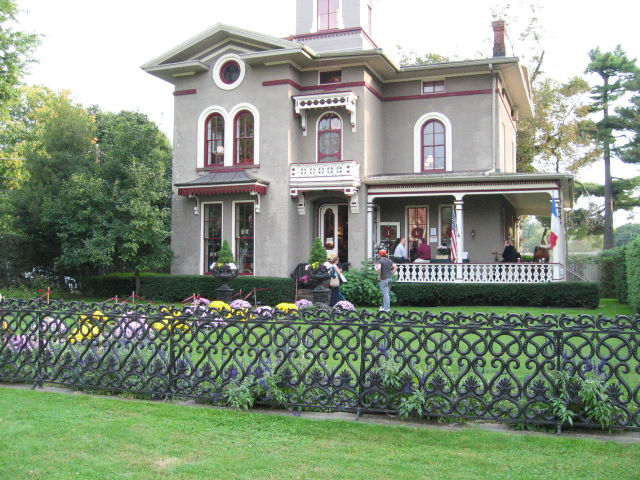 One of the city's grandest houses, on the river bluff,
completely restored in the Italianate style. Wow. 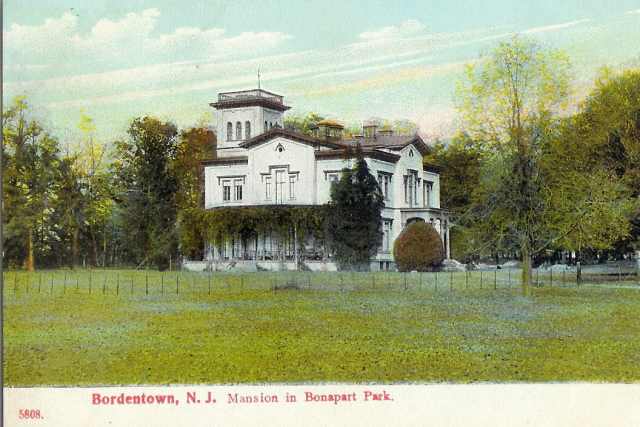 Napoleon's elder brother Joseph lived here from 1816 to 1847
after he was exiled from Spain, where he had been installed King by his brother.
His estate was called Point Breeze, and it was high on the bluff of course.
A 1983 fire destroyed the whole place, except for the tunnel he built
down to the river to afford himself an escape if his European enemies came to get him...

Just some of the small city's many architecturally interesting churches.
St. Mary's has been running a K-8 school since 1870.
Jews live in Bordentown as well; from 1874 to 1877, Bordentown had a Jewish tailor for mayor.
The Reconstructionist synagogue dates from 1917. WTH is Reconstrucionist Judaism, you ask? 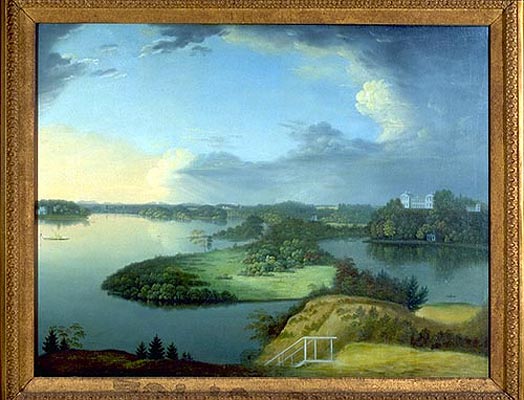 Here's a painting of Bordentown from a long long time ago...
but you still get some of this feel today, with the creek, the river, and the city on the bluff. 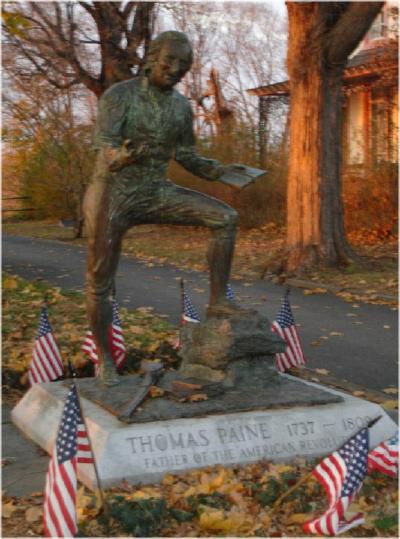 The town's most famous resident is Thomas Paine, the man who inspired the American Revolution
with Common Sense and The American Crisis, pamphlets purchased by a greater percentage
of the population than currently watch the Super Bowl.
So why don't we hear about Paine's ideas as often as those of Jefferson and Madison?
Because after the Revolution, he published The Age of Reason, in which he argued the Bible
is full of inaccuracies and contradictions and religious belief is not compatible
with reason. And you know how God-bashing goes over in this country... 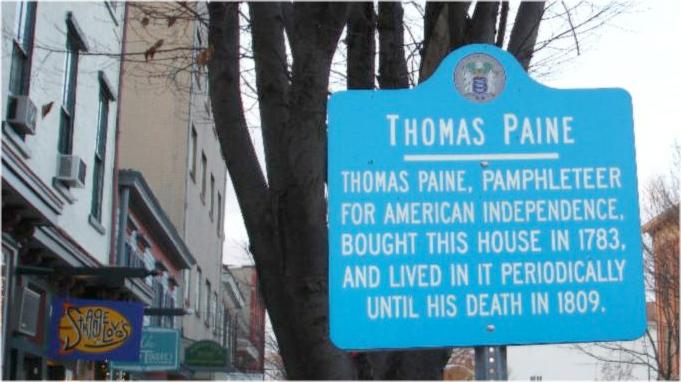 Publication of The Age of Reason lost Paine nearly all his friends and
undid the good reputation he enjoyed from his revolutionary writings.
He died bankrupt and alone, in Greenwich Village.
His house in Bordentown, the only home he ever bought,
where he was visited by the likes of Benjamin Franklin, is now a dentist's office.

I had rather see my horse Button in his own stable,
or eating the grass of Bordentown,
than see all the pomp and show of Europe.
-Thomas Paine, letter from Europe, 1789
Also recommended: Thomas Edison's 1925 essay, The Philosophy of Paine 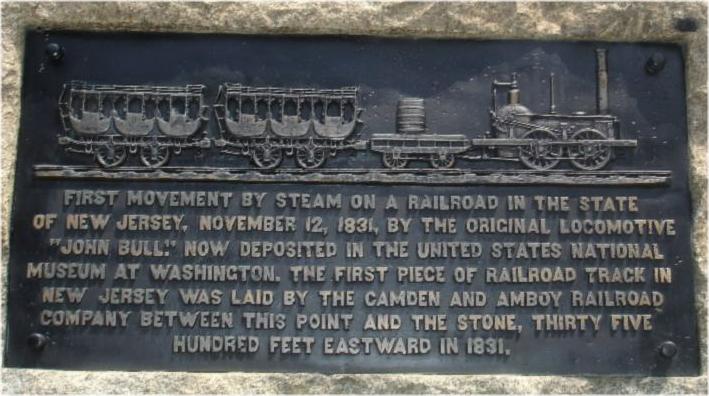 Site of the first piece of railroad track in New Jersey, right smack in Bordentown City 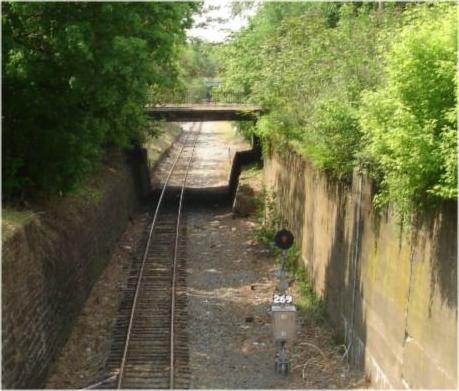 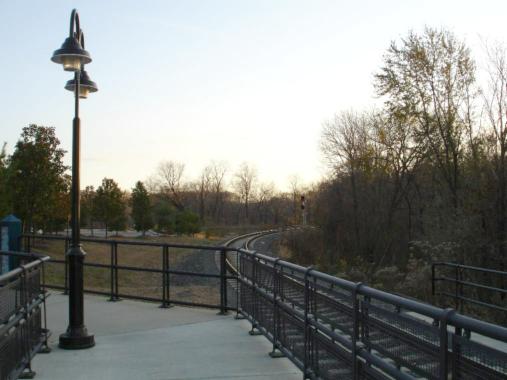 The empty platform at the brand new, tiny little train station.
Parking there is plentiful and FREE, can you imagine?
Compared to a six-year wait for a permit at Princeton Junction...
And it doesn't matter anyhow, you can walk to the station from the house...
in ten minutes you're in Trenton and from there you can transfer to NYC or Philly. 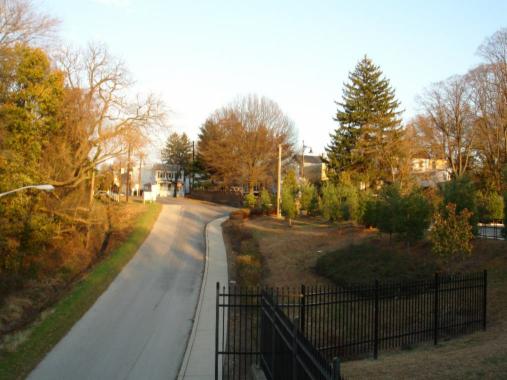 This is taken from the train platform,
and shows the steep road from the town down to the river.
You almost need a funiculaire in this place--
are there any of those in the US?
I've only been on the one in Quebec City... 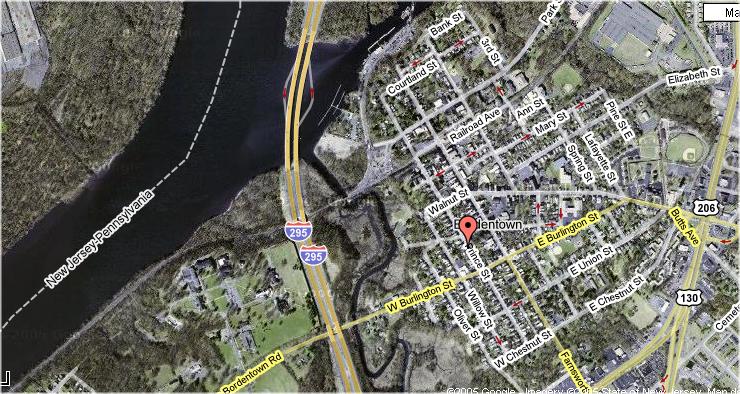 All of Bordentown City, aerial view
Delaware River at left, Crosswicks Creek emptying into it from the north.
You can see the marina just to the left of Courtland Street.
The brand-new River Line train tracks are right above it.

See more pix of our new house and street here.
You can read much more about Bordentown here.
and there's a a cool walking tour here.
If you're in a rush, check out this quick history.