Three views of the moody and dramatic skyline in Angra.
It thunderstormed every night we were there, lending a tropical quality. 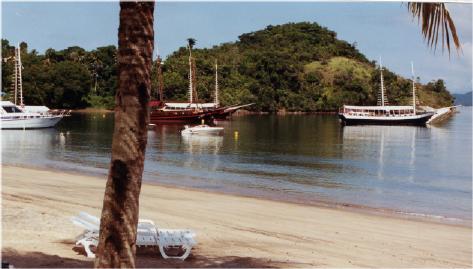 Boats in the cove by our hotel in the morning clear 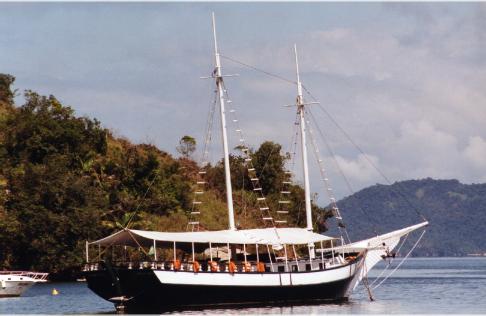 We took a memorable half-day cruise aboard this schooner. 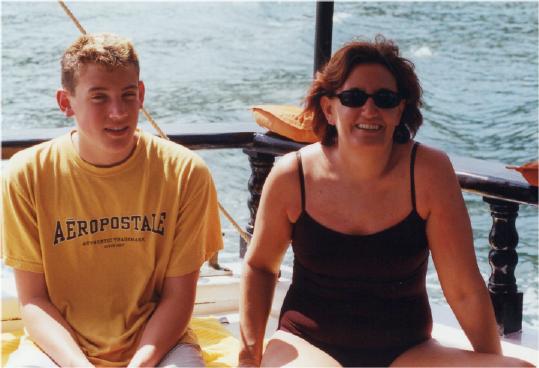 Tim and Deb enjoying the start of the trip

Angra is the location of many fabulous vacation homes owned by the rich of Rio and São Paolo.
Brazil has a terrible gap between rich and poor, by far the worst of all major countries.
And Brazil is huge; only China, India, the United States and Indonesia have more people.

We were told nice houses like these in Angra would cost about half a million US dollars.
Average wages in Brazil are about $500/month. Still, there has never been a revolution
in Brazil and the country has the world's lowest suicide rate. Sociologists attribute the people's
happiness to the perfect climate and the annual release from all inhibition known as Carnaval.

The clear green water of Angra is a big attraction to city-dwellers with the cash to get away.

A lovely setting, on the ocean against a backdrop of forest-covered mountain. 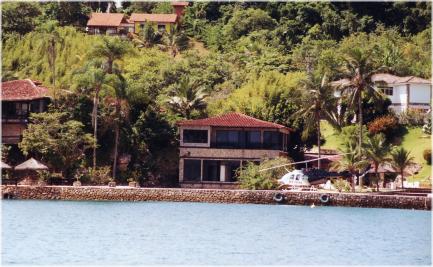 These folks even have their own helicopter, that's convenient. 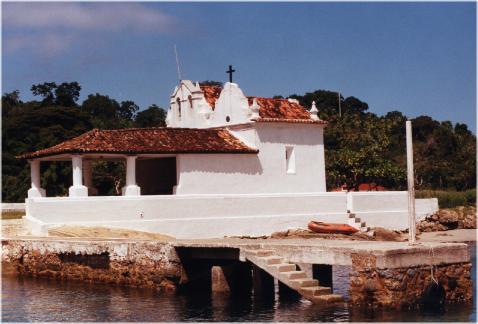 A chapel that can only be reached by boat.
It is used for weddings and they must be very romantic ones!

These guys spoke Portuguese and a little Spanish. Brazilians generally do not speak Spanish,
but knowing Spanish (or Italian or French) helps you understand enough Portuguese to get by. 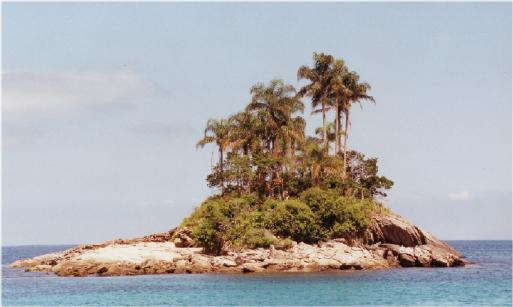 Angra has 365 islands, "one for each day of the year."
I asked if they've all got names, and they do.
So even this one is called something! 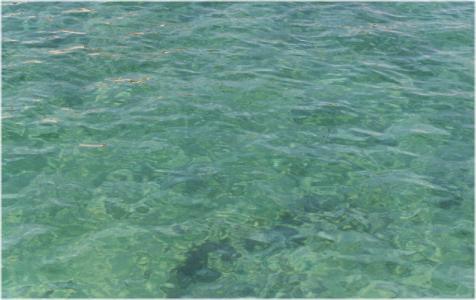 Liese wanted a picture of just the water color. 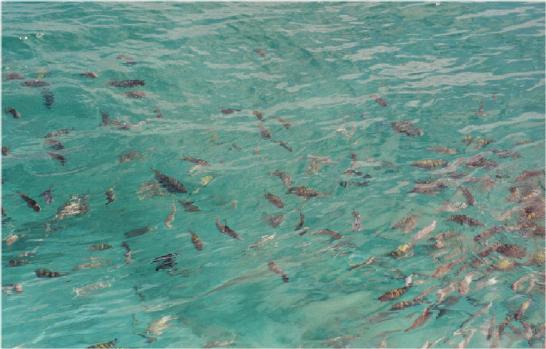 Moments later, a bit of bread thrown into the water brought swarms
of brightly colored fish immediately to the surface.
Later we swam and snorkeled among the fish. 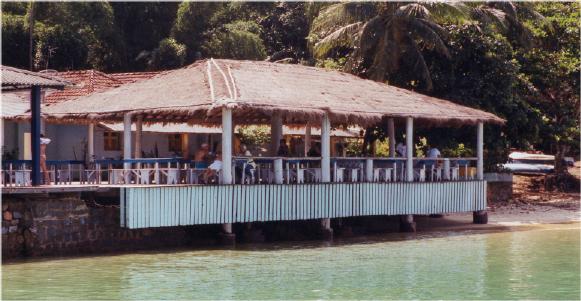 The boat stopped for a while so we could have lunch here. 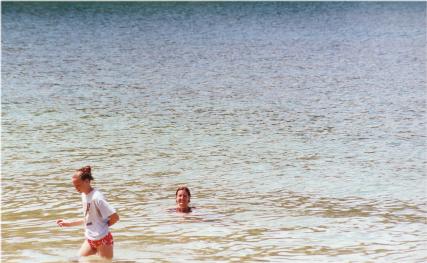 Liese and Deb enjoyed the water while waiting for lunch. 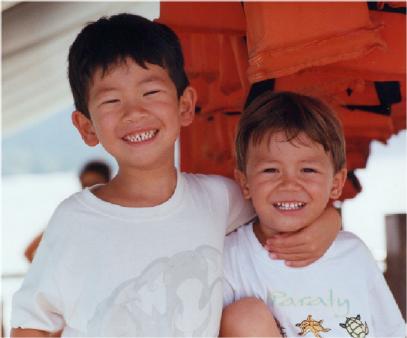 These two little boys on the excursion have a British father
and a Thai mother, and they're living in Brazil.
What a nice life! 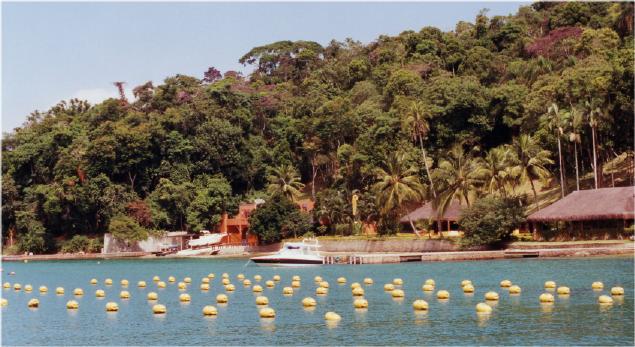 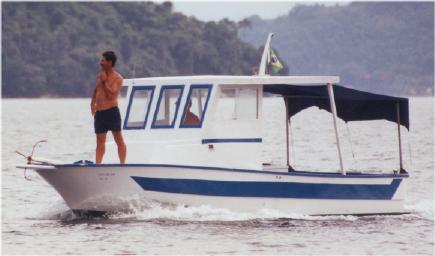 A sailor under the Brazilian flag 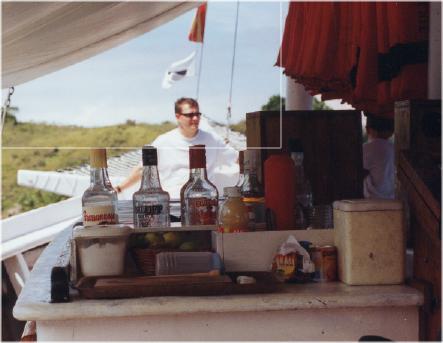 Shipboard bar (there's no running away from those caipirinhas) 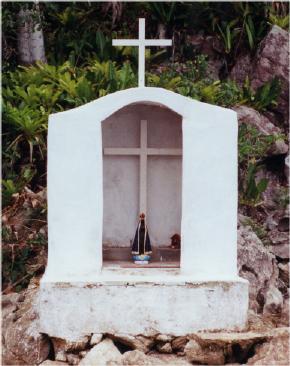 Tiny shrine on the water 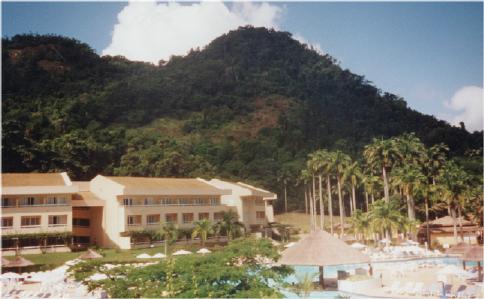 Part of the hotel where we stayed in Angra 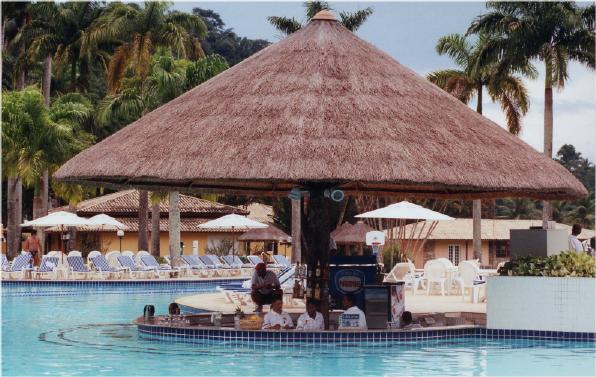 "Submarine" bar in the hotel pool, swim right up! 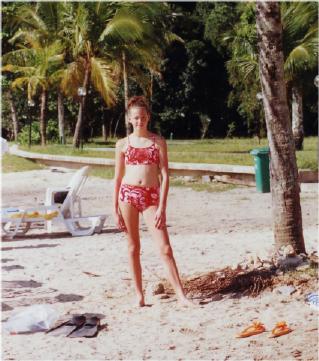 Liese on the beach at Angra